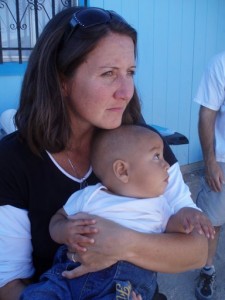 In October 2007, my family was privileged to serve in Juarez, Mexico, alongside friends of ours. We witnessed firsthand the very real, very basic needs of these people. I returned a changed person. My vision has been altered significantly, and I see my blessings much differently now.

Diapers…
In Juarez—a ten-hour drive from Denver and a six-hour drive from Phoenix—many babies wear the same diaper for four or more days because the family can’t afford new ones. A mom will go to the store with enough money for one diaper. The diapers are used and reused until they can no longer hold anything more, and the mom will go back to the store with just enough money to buy a new one. Cloth diapers aren’t an option because water is so scarce in Juarez. Our team in the clinic saw babies with horrible sores on their bottoms and the parents with no means to help them.

Formula…
Just a car drive away, many mothers are too malnourished to breastfeed, and babies are dying due to lack of proper nutrition. A mother’s milk often dries up in the first 30 days after giving birth. Up to twenty-five percent of the babies in Kilometer 30 (an area in Juarez) don’t live longer than six months. It’s extremely common for parents to not name their babies until after six months because of the terribly high infant mortality rate*. Formula is literally life itself to these people.

My babies did not go without food. My babies didn’t go more than a few hours without a clean diaper, much less days. My babies were named before they were even born. I feel compelled and privileged to do anything I can to help these incredible people. If you would join with me, I promise your help will be life changing for the babies of Juarez. Here’s how you can help.

* While we don’t have a good way to document this, staff members of Missions Ministries tell stories of lives being saved and that the infant mortality rate is gradually improving in the colonias through this project.